My little one loves little pumpkins – the smaller, the better. So, we usually end up with a large collection of mini pumpkins at our house! : )

What to do with them besides sitting them in a bowl on the table? We have found they make wonderful teachers’ gifts. Here’s a craft Doodle-Leigh and I did together last year. And I’m sure we’ll be doing it again next week, though we’ll change our design up a little since she has the same classroom teachers in preschool this year!

We turned our pumpkins into cats, in honor of our two black cats (whose birthdays are Halloween week)!

First we added stick-on googley eyes from the craft store. For the nose, we glued on a triangle cut out of thin, black craft foam. Then we stuck black chenille sticks into the pumpkin for the whiskers. Next came the ears…

We layered those triangles on top of slightly larger triangles that we cut out of thin, black craft foam and more cardstock. After those dried, we glued the layered ears onto the tops of the pumpkins. We used heavy white craft glue (which you can see in the pictures that we took before the glue dried clear.) We curved the bottom edge of our triangles to fit the pumpkins better. Violà! 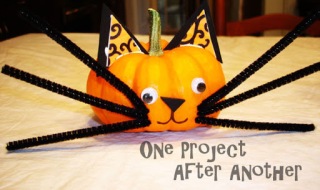 Doodle’s teachers really liked them and we even received a different animal-themed pumpkin the next week that she had created in class…a pumpkin spider.